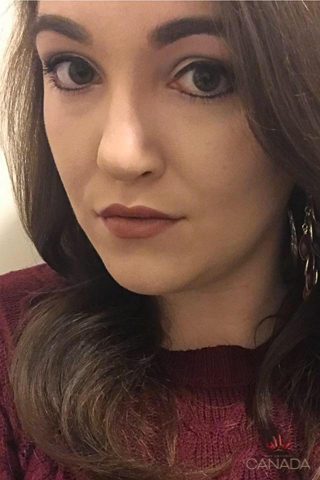 Courtney Jones was born in St. John’s, Newfoundland and Labrador. She graduated from Memorial University with a Bachelor of Science in Behavioural Neuroscience and is now pursuing a dual English law and French Law degree. Throughout her entire life, Courtney has been and continues to be an avid volunteer, and particularly enjoys helping women’s organisations. Throughout her undergraduate degree, Courtney spent time volunteering on a crisis line supporting victims of sexual violence and as a clinic volunteer for her local Planned Parenthood. She later joined the board of Planned Parenthood as chair. In her first year of law school, Courtney took on a volunteer project with Citizens Advice, which is an organisation that provides legal information and advice in various areas of law including housing and family law. Courtney’s passion for human rights is what led her to pursue a career in law and develop an interest in politics. Courtney was honoured to have had the opportunity to serve on both her Member of Parliament’s Youth Council and the Premier of Newfoundland and Labrador’s Youth Council, which gave her the opportunity to advise elected officials on matters of government policy. Her mission, hopefully as the next Miss Universe Canada, is to inspire more women to become involved in politics and someday run for office. As someone with a background in science who is furthering her education with legal studies, she hopes to inspire young women and girls by showing them that they really can do anything and to not let anyone tell them they can’t do something because of their gender. In her spare time, Courtney enjoys reading, playing the piano and stunting with her cheerleading squad.

My interests are politics and science. My interest in politics developed when I started volunteering for women’s organizations, and I recognized how much positive change could be made through public policy and legislation. It has always been my goal to do everything I could to help people, and politics seemed like possible way to do this on a larger scale. As for science, this was always something I was interested in. Even in childhood, my two favorite subjects were math and science. I thought pursuing an undergraduate degree in neuroscience would provide a good balance between the social and life sciences.

What I most enjoy doing aside from volunteering is stunting with my cheerleading squad. I started cheerleading in junior high school and fell in love with the sport. This led to several provincial competitions with my squad until I was unable to continue because our coach had moved, and we were unable to acquire another one. I decided to begin participating in the sport again in university, and I am currently cheerleading for my fifth year.

I have been playing the piano for 20 years, 14 of which I spent in classical training.

I have been cheerleading for almost 5 years and spent 5 years figure skating.

My great-aunt Ollie. I don’t think there was one time that we were together where she didn’t remind me that I could do anything I put my mind to. She taught me to never let anything hold me back, always follow my heart, and most importantly, to be kind.

My proudest personal accomplishment was being accepted to do a dual English and French law degree and being appointed to the Premier’s Youth Council.

The most interesting thing that has ever happened to me was being asked to introduce the former Minister of Public Safety at an event. This was quite a big deal to me because of my interest and involvement in politics. During the event after the introductions, I even had the opportunity to speak with the Minister about work the Canadian government was doing to end human trafficking which is something I am very passionate about.

My career ambition is to become a human rights lawyer, and hopefully someday a Member of Parliament. To accomplish my goal, I am currently studying a dual law degree in English and French law. I do pro bono work every week with an organization that provides advice to people around the country on various issues including housing, debt, family law, and discrimination. I am also a member of the law subject council and women’s equality panel at my university.

My dream job would be to work for the United Nations as a human rights lawyer, particularly for UN Women.

I was raised in beautiful Torbay. My parents were both very hard-working and raised me to be the same, as well as an honest and compassionate person. They always encouraged me to try my best and to help others whenever I had the ability to do so.

My first ever paid job was as an extra in an independent film. This was a really good experience for me. It gave me the opportunity to better learn how the entertainment industry worked and I was able to spend all day on set and meet a lot of interesting people.

I can wiggle my nose.

The most interesting place to which I have travelled is within Europe. It’s incredible to see all the culture and history and hear so many different languages being spoken.

In 10 years, I hope to be a successful human rights lawyer helping victims of human trafficking.

Four years ago, I experienced something that no woman should ever have to go through. I was sexually assaulted. While this was a very difficult thing to have gone through, I was able to heal with the support of my family and friends. Going through this has definitely motivated me to keep working to improve the rights of women and girls. It is also one of the reasons I became so dedicated to improving the representation of women in politics. This is because when women are properly represented in politics, it empowers us to have an impact on legislation that impacts our lives in fundamental ways. This is also why I have created the hashtag #EmpowerToSucceed, to spread the message that by empowering young women and girls to pursue their highest goals and dreams, not only will we help them succeed, but this will lead us to success ourselves.