Kesiah Papasin the first runner up at the 2014 Miss Universe Canada competition will be representing Canada at the Miss International 2014 pageant taking place in Tokyo, Japan on November 11th 2014. We would like to wish her the best of luck in the competition. 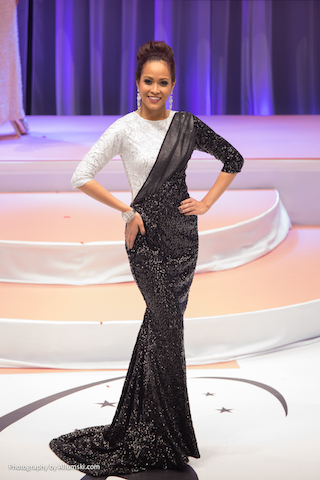 Kesiah Papasin is 23 years old, born and raised in Toronto, Ontario When she was 13, while attending the 2004 Canadian Model and Talent Convention (CMTC) in Toronto, Kesiah met Natalie Glebova, Miss Universe 2005.

She was captured by Miss Glebova’s beauty and determination. Inspired and motivated by her, joining pageants became Kesiah’s passion. She remembers Miss Glebova saying, “You should join pageants and if you lose, try again till you win.” Kesiah has won several awards and titles since.

Kesiah was born with unilateral clubfoot and moderate hearing loss. She had to wear corrective braces for a year and both ears are currently aided. But Kesiah did not let her physical challenges hinder her dreams and goals in life. She registered herself in the Eleanor Fulcher International modelling workshop to improve her self confidence. One can say that Kesiah achieved the purpose of this workshop, her teacher and friends once described her as “social butterfly.”

She took ballet, tap, jazz and modern dance classes. She and her older brother were partners in ballroom dancing lessons, which came to a halt when her brother decided that ballroom dancing was not for him. She also took private lessons in Tahitian dancing. She joined various local swimming competitions till the age of 16. She received gold and silver medals to prove her swimming abilities. In high school, she excelled in sports when she came out first and broke school records in Women High Jump Junior.

Kesiah is currently studying Border Services and Immigration at Humber College, aspiring to be a CBSA Officer or Immigrant Consultant. She worked every summer at a bank to help finance her dreams.

Raised in a close knit and religious family, Kesiah learned at an early age not to be judgemental and stereotype others. She believes in equal opportunity and treatment for everyone. She also believes in sharing her blessings by volunteering in fundraising activities for the underprivileged. She gives them support and respect. She remains a good role model and a proud mentor for aspiring young models.

She loves to travel. She admires the exotic nature of Hawaii, the lifestyle, everlasting arts and culture in Italy, the hospitality and generosity of people in the Philippines, and the clean environment in Australia. Pageantry has taken Kesiah to compete in different countries. Kesiah enjoyed the friendly atmosphere, boat rides and view of the river in Guayaquil, Ecuador. She could not believe how safe it is to hold a big iguana on its tail while having pictures taken. She also enjoyed the modern city of Aachen, Germany. Although she didn’t see much of the country, the Netherlands is the place to see for its beautiful country, masterpieces and tulip fields. Kesiah hopes to have the opportunity to continue travelling and mingling with various peoples and cultures. She hopes to contribute and participate in improving lives and uplifting spirits.

Vote for Canada at Miss International 2014