Created in 2002, the “Beauties of Canada” Organization has the exclusive rights to send a Canadian representative to the Miss Universe® Pageant.

The company president, Mr. Denis Davila, a Nicaraguan-born Canadian, has worked in the beauty pageant field for over a decade, and has successfully produced events in both Canada and Nicaragua.

Since 2003, the Miss Universe Canada Organization has strived to be an active member of the GTA community. We’re proud to have addressed over 10,000 students at schools thru the MUC inspirational speaking tour.

Our talks focus on the importance of education, setting goals, pursuing your dreams as well as delivering an anti-bullying campaign.

Our tour has been covered by both Print and TV media outlets including the Toronto Sun, ET Canada and E-Talk Daily. For example Mike Strobel feature writer for the Toronto Sun wrote a story titled “A True Queen for Our Kids” after attending one of our talks. 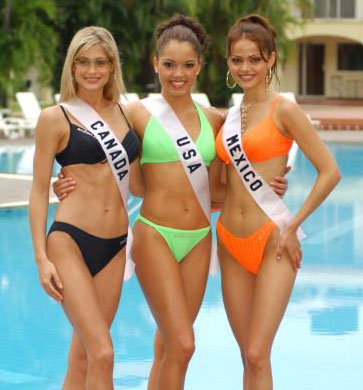 We have also assisted numerous charities within the diverse ethnic communities represented in the GTA.

Miss Universe Canada regularly attends and is featured as a VIP guest at the premier entertainment and sporting events throughout Canada, including the Canadian F1 Grand Prix in Montreal, The Toronto Grand Prix, The Toronto Blue Jays, The Toronto Raptors, Canadian Idol, The Toronto International Film Festival and The Much Music Video Awards amongst others.

Beauties of Canada holds the exclusive rights to send a contestant to the Miss Universe Pageant. In addition, we hold the licenses and send Canadian contestants to the following competitions: